I have finally finished reading all nine books of the Weather Wardens series, and I thought I'd tell you what a gem it is just in case you've never found it before.
Because, Darlin', this is the best thing that will cross your TBR shelf.

I can see what you're thinking: nine books? Scraping the barrel and ekeing the money out much?
Don't be so rude. You're wrong.

For those of you who have read the Morganville Vampires series, times that by a hundred and two. That is how good this series is.

Sure, the main character, Joanne Bladwin, has to go through a heckofalot of stuff, but that's what makes it great. You don't want to read all nine at once, your brain might explode, but... wow.

You may have seen my earlier post about having loads of ideas and stuff going on? Well, somehow, this is all the Weather Wardens, Total Eclipse's fault. This is the second time that I've read Weather Wardens and had a Eureka moment of idea-explosion: it also happened in NaNo '12. Yes, this series is idea-growing. It's like idea-fertiliser. And why is this? I don't know, but I can happily speculate.

Every book is... real. There are real emotions, and the good guys don't always win. In fact, as the series goes on, the good guys are more and more just doing weather-first-aid, rather than actually getting on top of the problems. People die, and it hurts the main character. And it contiues to hurt the main character. It feels real. I am reading real, all be it magical, life when I read this series. That's how it feels, anyhow.
Furthermore, each book... isn't just a book. You don't just have one major even that is built up to throughout the book. Every book is jam-packed with fights and ambushes and twists and turns and sudden shocks, and you're dragged along so fast that you don't have time to think, How often is this gal gonna save the world? But even if you did had time to ask that question, she's asking it too, adding to the real-feel and making your brain burst with things and ideas and stuff.

Look, to say I'm a book-review blogger, I am pretty rubbish at book reviewing, so here is the basics: you can't not read these books. At least try reading the first. You won't regret it -- not even when you get to the end of the series, because even though it's an end, it's a nice end. It's a sweet end that I seriously nearly cried at out of happiness. It was that beautiful. 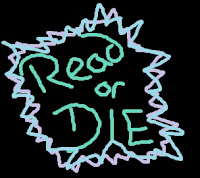 Rachel Caine fan out!
Posted by Charlotte at 4:00 pm