A to Z Survey 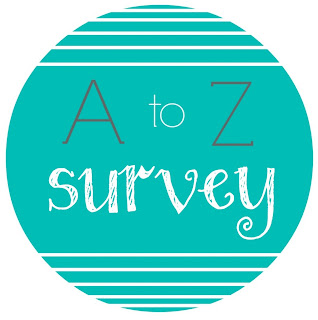 I'm back from the end of the land and my holiday! Hurray! I think I promised a round-up thing of how my WiP first draft went, but I'm procrastinating over that. Instead, you get this survey originally from The Perpetual Page-Turner! Yay!

Author you've read the most books from: Probably Rachel Caine -- I love all ten Weather Wardens books, and I've read a lot of the Morganville Vampires books, though I've sort of gone off them.
Best sequel ever: Tough one -- I love all sequels, usually, simply for the fact that there is one. But I think the best has to be The Evolution of Mara Dyer.
Currently reading: The Picture of Dorian Gray by Oscar Wilde.
Drink of choice while reading: Robinsons Orange and Barley squash. I basically only drink squash and Coke.
E-reader or physical book? E-reader. I love books a lot, but I also love my Kindle and not having to cart around very heavy books -- especially when on holiday like I just was.
Fictional character you probably would have dated in high school: well, I'm still in school, so... I think probably Adrian from Vampire Academy and Bloodlines.  I just always want to give him a hug. And he is so romantic in The Indigo Spell that he just can't be beat. Since this is hypothetical and he is fictional, he'd also probably have to not be a drunkard who was five years older than me.
Glad you gave this book a chance:  The Unbecoming of Mara Dyer by Michelle Hodkin. I wasn't so sure about it at first, if you can actually believe it.
Hidden gem book: Samantha Young's Slumber (Chronicles of the Fade #1).
Important moment in your reading life: when I read The Book Thief. First book I ever cried at and one of the greatest books in the history of forever.
Just finished: The Magnus Bane Chronicles #1: What Really Happened in Peru. Don't read it. You will want to punch Magnus Bane and Cassandra Clare in their pretty little faces. It is way too cruel for words.
Kind of books you won't read: Contemporary. I know I've read some -- I think I've even reviewed some of them on here -- but no more. Reading them makes me feel dirty (says the girl who is writing a novel that walks the line between speculative and contemp. Don't talk to me.). I hate the 'broken person healed by love' trope.
Longest book you've read: If I'd got through Les Mis, I could say that, but unfortunately I didn't, so I don't really know.
Major book hangover because of: The Unbecoming of Mara Dyer by Michelled Hodkin. Anything I read afterwards paled in comparison.
Number of bookcases you own: two. I have one in my room and my old one is on the landing and serves as a kind of communal thing for the books me and my brother have grown out of but can't find the will to get rid of.
One book you have read multiple times: I read lots of books more than once! The one I've read most times, though, is probably Vampire Academy #1. I think it's got up to 4 re-reads now.
Preferred place to read: in my house somewhere. The living room couch, probably.
Reading regret: that I used to be a Twilight super-fan in my youth. Sure, it introduced me to the genre that I love, but did I have to be so obsessed with it? Could I not have realised how bad it was sooner?
Series you started and need to finish (all the books are out): ha! I don't have the luck of discovering serieses after they've finished. My life is a list of Amazon Pre-Orders and cliffhanger tears.
Three of your all-time favourite books: that is just mean. Three?! Probably The Unbecoming of Mara Dyer by Michelle Hodkin, The Book Thief by Markus Zusak, and Vampire Academy by Richelle Mead. No, wait, what about Weather Wardens? And the Kate Daniels novels? And the Alex Craft novels? This is too difficult.
Unapologetic fangirl for: Vampire Academy and Bloodlines, of course.
Very excited for this release more than others: The Fiery Heart (Bloodlines). And Grave Visions (Alex Craft #4) by Kalayna Price. You can't expect me to choose just one.
Worst bookish habit: breaking the spines on my books.
X marks the spot -- starts at the top of your bookshelf and pick the 27th book: it depends how you're doing it, because my bookshelf is double stacked and stuff, but what I got was... Lord of Misrule (about #100 in the Morganville Vampires Series).
Your latest book purchase: I just pre-ordered Grave Visions (Alex Craft #4) by Kalayna Price.
ZZZ-snatcher book -- last book that kept you up way too late: I haven't stayed up too late to read since I started getting migraines when I was ten, so it's a hard one to remember -- but I think the last one I remember was a book by Dianna Wynne Jones that I can't remember the name of but had something to do with red and white Welsh dragons and magic.

Well, that took up even more time than I imagined it would (I've been kind of stuck for purpose since I decided to take a writing break [which, if you don't count my holiday, has been today and yesterday and that is it] because all I want to write is my WiP and I'm supposed to be letting it rest [which I'm probably going to give up on soon and just go straight into my first read-through], so this is better than it sounds). Hurray!

Charlie out!
Posted by Charlotte at 4:18 pm