Another film! Hurray for Orange Wednesdays and half-term!
So, Woman in Black. It's a 12A.
Yes, those of you who are deaf and have read the book, you heard me right (or maybe you didn't, since you're deaf). It's a 12A.

So for those of you who don't know (which is hopefully most of you weirdoes), I'm 15. I could have gone to see something proper scary, one of those 15-rated films that 10 year olds watch from under the covers at a sleepover. But I didn't, mainly because I've only watched 2 proper horror-ish things -- Shaun of the Dead and Sixth Sense (at home, where I could just run out screaming and not be worried about the money I wasted on tickets) -- so I figured going to see a scary film that was only a 12 would help me get into the whole horror-movie thing so I won't embarrass myself by saying I'd never watched something scary at the cinema even though I'm twenty two or whatever.
Yeah. There's a reason I don't do scary films -- and Woman in Black was certainly scary.
I liked Woman in Black. Like I imagine most scary films are, it was a bit of a cliche; people watching our good-looking hero Daniel Radcliffe from a window as he walks up to the house that no one will go in, creepy noises that end up being nothing, etc, etc. It was great.
But then they put the proper, I'm-going-to-eat-you-alive tension music on, and we got down to the serious stuff.
The scary scenes were all disjointed and full of anti-climaxes and big jumpy bits when you were just chilling and thinking, thank goodness that's over. There didn't seem to be any sort of rhyme or reason to when you'd get scared out of your life, and I both loved and hated that -- it took away from the cliche-ness but at the same time was really scary, rather than pretend Hollywood scary, which I imagined it would be as it's a 12.
Yep. So, I'm going along, being scared out of my life and having to hug my mum like I'm a seven-year-old watching Doctor Who, and then we get to the end.
Argggh! Has nobody ever heard of a Goddamn happy ending? Try to scare me to death and then let me think the ghost will chillax? Arghh!
--embarrassed clearing of throat-- Yes, well, it kind of annoyed me. The other thing that annoyed me was that, since it was a novel, it should have had the story at the forefront, but it didn't. I can't say whether that's the fault of the original writer, since I haven't read it, or if the film people wanted to scare people half to death more than they wanted people to know why they were scared to death -- the actual reasons for all of it seemed to be on the backburner a little bit, and I found myself thinking, 'so what?' when we finally found out the reason for the crazy ghost chick's crazy ghostliness.
All I wanted was a happy ending to tie the story and the scary together (insert sad face and puppy-dog eyes here).
Overall: I liked it, but the story didn't seem as important as it should have been, and it was too scary for a 12A film. Fortunately, I may have had nightmares (that or I've got insomnia) and I like being scared. I'll give it four stars.
Scared chick who knows nothing about horror films and shouldn't really be bothering to review one out! 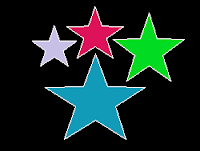